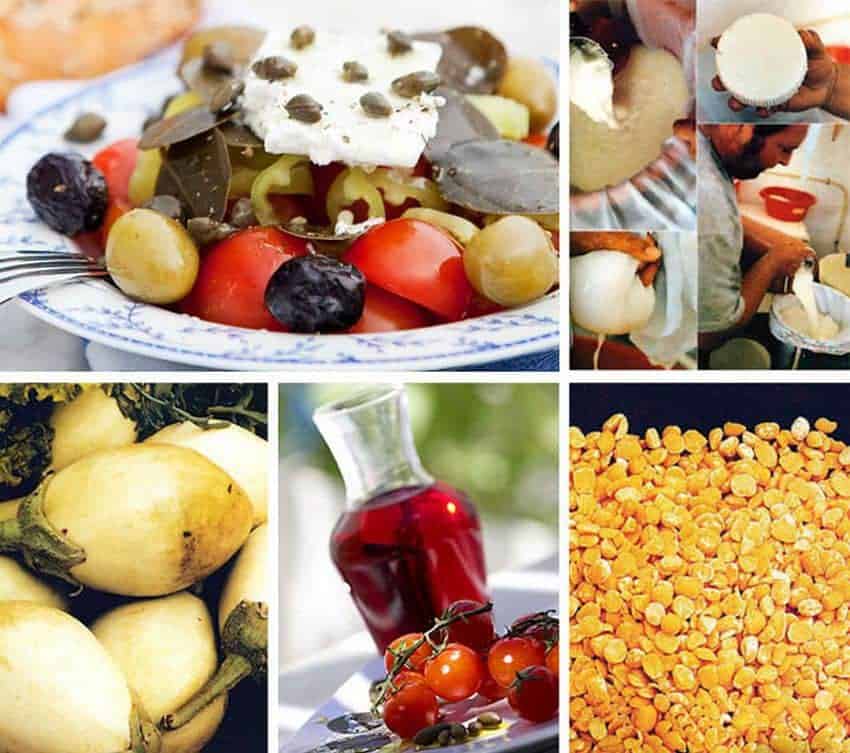 Santorini’s cuisine and Santorini Local Food is characterized by dishes that contain ingredients that are indissolubly linked to the Mediterranean diet. The agricultural production of the island, due to the volcanic soil, offers unique culinary delights, satisfying even the most demanding palates.

After arriving in Santorini, you will probably be hungry. If you are wondering what tastes to taste, we have prepared a list of traditional local dishes to enjoy during your stay in Santorini, escaping from the usual tastes.

Santorini is also a leader in flavors and is another example of the richness and variety of the amazing local products of the Greek islands.

Rent a car by selecting the type of car that you want, at the Santorini location you desire, at the price that only Santorini Holiday Cars can guarantee you and visit the various restaurants and taverns of Santorini to taste the delicious local dishes!

Fava Santorini is one of the most important products on the island and Santorini Local Food, along with amazing local wines, tomatoes, and local capers. The fava comes from lathurus clymenum, a local variety of yellow pea (not to be confused with what Englishmen know as beans). According to the archaeological findings of the Bronze Age, the exploitation of the fava has been consistently and exclusively developed on the island for more than 3,500 years.

Fava Santorini is basic food for the locals served in various ways, depending on the time of year.

The summer is made with red tomato sauce and is called “pantremeni (married)”. In the winter, fava is accompanied by a fried crab (smoked pork).

One of the most popular appetizers you can taste in Santorini is the tomato keftedes (or pseudokeftedes as it is called on the island), which consists of tomatoes of Santorini, basil, and mint.
The island’s famous tomato keftedes, which has the Santorinian tomato, has a unique aroma and a unique flavor that will surely open your appetite before the main meal.

Today, Santorini tomato is one of the typical products of Santorini and there is a pate factory that gives reasonable hopes that the local tomato variety will continue to produce various products.

If when you visit a place looking for inspiration in its traditional local cuisine, then Kopania deserves your attention. They are usually made in small rolls of barley, raisins, and sesame seeds. It is a very simple tasting treat and at the same time, it is healthy and nutritious. If you want to eat something sweet but avoid fats then Kopania is the answer. Kopania is considered one of Santorini’s most authentic desserts in Santorini Local Food and can be found in variations, such as containing wine.

In Santorini, Melitinia is sweet treat offered at various festivities and weddings. They are made with salted mizithra and yogurt, which are then flavored with mastic. You can find them in the traditional bakeries of Santorini, while they are very similar to the durtuletia that are also made and served at the feasts, and at weddings.

Apochti is pork processed in a specific way including baking it with salt, vinegar, cinnamon, chopped parsley, and black pepper. It takes at least four days to prepare as its spices need to be dried in the sun, but when it is ready, it can be eaten several days later – either sliced or used in other foods. Apochti as a Santorini Local Food has Byzantine roots, as evidenced by the name “apochti” (the Byzantine term for this gourmet delicacy is apoktin).

The traditional local cheese of Santorini is called “Chlorotyri” and is made of goat’s or sheep’s milk. It is creamy and slightly sour and if you find it somewhere in Santorini, try it anyway! Produced in very small quantities by local producers and therefore difficult to find!
It is a local variety of very limited production cheese, which you will not find elsewhere in Greece. Chlorotyri is spread in slices of bread or mixed in the salad. 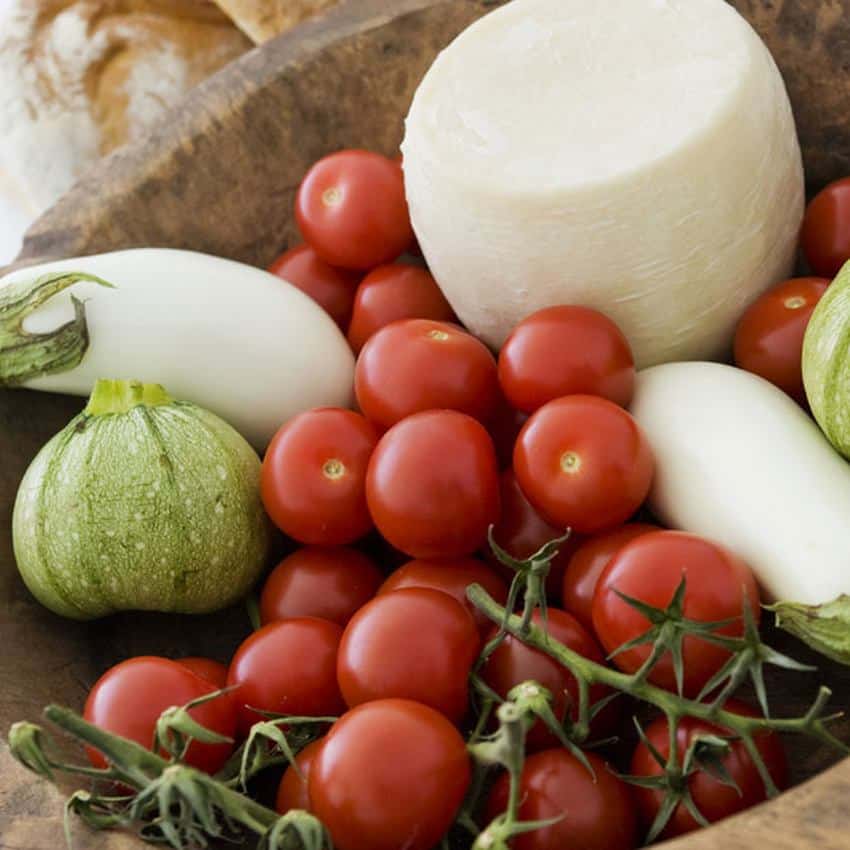 Santorini is not only famous for its unique beauty but also for its unique tomatoes. Santorini tomatoes are so small that most visitors to the island find it hard to believe they are real tomatoes. Santorini’s tomatoes are unique and grow exclusively on the island, as the volcanic soil of the island contributes to its production. It has a deep red color and its exterior is somewhat harsh, as opposed to its interior that is juicy.
For traditional tomato cultivation, small pits are created on the ground at a distance of 30cm from each other, where several dried seeds are planted. Sowing takes place in February while harvesting takes place from late June to early August. The harvest season is a real celebration for the island of Santorini.

Another rare product of Santorini Local Food with many comparative advantages is white eggplant. It has very few seeds, does not absorb much oil when fried, and has a particularly sweet taste. You will find white eggplant in various restaurants on the island, which is definitely worth trying, while our suggestion is to choose eggplant salad with white aubergines. It is the perfect accompaniment to ouzo or wine.

Santorini is a wine-growing region. The wine has been produced on the island since antiquity, but during the Middle Ages, Santorini wine became world-famous under the influence of the Venetians. Italian influence still exists in the modern vinification of Santorini: the most famous sweet wine of Tuscany is called Vin Santo. Vin Santo of Santorini (“Vinsanto” to distinguish it from Tuscan wine) is made from grapes that have been dried in the sun after harvest.

In Santorini, you will find in a Greek version of the Napa Valley, many wineries that you can visit to see the way of production and try various local wines. This is Santorini, one of the most beautiful places in the world. There are about forty domestic varieties of grapes in Santorini and the vines are low to be protected from strong winds. The peculiar character of Santorini’s wine comes mainly from the island’s unique volcanic lands.

“Koufeto” is the most famous traditional sweet in Santorini, which is still served today during weddings and festivals, but is now widely sold in Santorini Local Food shops throughout the island.
Be part of a beautiful and delicious wedding ceremony of Santorini and the whole of Greece, tasting these amazingly small sweets made by the Union of Santorini Cooperatives with your coffee, your cake, and even your ice cream!
“Koufeto” is made only by honey and almonds. These ingredients are considered symbolic for the future of the couple. Honey symbolizes sweet life, while almonds symbolize fertility.

Kardamydes are awesome green herbs that make wonders in fighting cholesterol. They are harvested at the end of spring in fields and vineyards all over Santorini. During this time, they can also be found in the central market of Fira and some Santorini Local Food shops. They are an excellent accompaniment to fish food and because it is not easy to find, where you find it try it!

Katsuni is the name given by the locals to the cucumbers grown in Santorini. It is larger than the common cucumber and has thicker skin and more seeds. If it is not picked up in time, it becomes sweet and has a melon flavor! Katsuni is unique for Santorini because it only grows on the island. It has a lighter, cooler flavor than regular cucumbers and is an essential ingredient in local salads.